This article is a stub. Stub templates just show off a wiki's flaws. Instead of using a stub template, make the page better by expanding it.

The 10 Year Anniversary Event was a 24 hour live stream event held on Twitter on December 18, 2019 to celebrate the 10th anniversary of the release of the film Avatar in cinemas.[1]

As a sign of appreciation of Avatar fans worldwide, producer Jon Landau announced a live stream with interviews and unreleased behind-the-scenes footage on December 11, 2019 on Twitter. [2] The event would start at midnight EST one week later. Followers were asked to send in questions that they would like the film's cast and crew to answer.

On December 18, 2019 at 12:00am EST, the 24 hour live stream started. It was accompanied by many posts on the official Twitter page which contained teasers and clips from the stream. 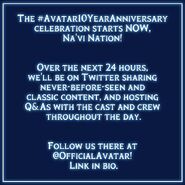 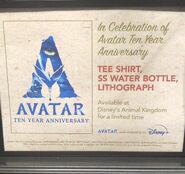 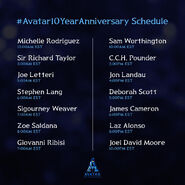 Add a photo to this gallery

The stream started with James Cameron giving a short introduction. The rest of the stream consisted of pre-recorded clips of Q&As and reflections with cast and crew, concept art, featurettes, behind-the-scenes shots, a pre-production photoshoot and the original Avatar film trailer. Most of the clips were streamed repeatedly during the 24 hours.

James Cameron starts the stream for the 10th anniversary explaining the motivation for the stream and what to expect.[3] He explains that it is meant to show appreciation for their fans. The cast and crew would answer questions posted previously on social media and give some insights on the production. He also announces that the viewer is about to see some never before released behind-the-scenes material. He concludes by thanking the viewer.

Members from before and behind the scenes answer questions that were posted on Twitter in the week before the stream. Every questions and answers clip features only one individual who reads out questions addressed to him/her and answers them spontaneously.

In the outro of the anniversary stream Zoe Saldana thanks the viewer for watching and points to the future of the franchise.[27]

Retrieved from "https://james-camerons-avatar.fandom.com/wiki/10_Year_Anniversary_Event?oldid=123855"
Community content is available under CC-BY-SA unless otherwise noted.