Avatar Wiki
Register
Don't have an account?
Sign In
Advertisement
in: Avatar, RDA, Avatar: The Game,
and 2 more

The Avatar Program enabled the humans to explore the remote and hostile environment of Pandora without endangering human life. Essentially, the technique was similar to the use of remotely operated robotic vehicles for exploration. However, the Avatar Program used biological human/Na'vi hybrid bodies called avatars. They are specifically engineered for operation in the Pandoran environment. The operator was able to use the avatar body as if it was his or her own, enhancing freedom of movement and increasing work output.

The practical difficulties soon showed a need for a more profound means of communications between the human and the Na’vi species.

RDA research already established the possibility of direct mental communication between humans. RDA scientist Dr. Cordell Lovecraft was given the task of carrying his Dark Dreamer project, which sought to transmit mental processes – “thoughts” – to humans at a distance, as well as interspecies mental communication.

Initial dissection of Na’vi specimens found that although the Na’vi show a surprising degree of external parallel evolution, their internal anatomy and metabolic processes were substantially different from that of humans. The Na’vi brain in particular, with its external neural queue and three cerebral hemispheres (versus two for humans), proved a daunting obstacle.

Since the Na’vi cellular nucleus organelle does not use nucleic acids (DNA or RNA) to encode genetic information, producing a ‘translation table’ that matched a specific human's DNA to a Na'vi NVTranscriptase equivalent closely enough to allow a level of neural resonance strong enough for congruent mental communication to occur required many months of processing on massively parallel "zettaflop" photonic computing arrays as well as many failed experiments; some of which caused severe permanent psychological trauma to volunteer subjects.

With the aid of thought amplification/transmission "link beds" as well as customized nanotech receiver/transmitter nodes grown into avatar brains from their earliest blastomere stage of development, human "drivers" can now operate their avatars at distances of tens of kilometers. These distances can be reduced in areas where the Pandoran magnetic fields are very strong, such as near the many flux vortices.

Originally part of RDA’s Na’vi outreach program instigated at the behest of Earth's government authorities, the Avatar Program has moved from being a poorly-defined xenobiological experiment controlled by Earth-based bureaucrats, ivory-tower academics, and populist politicians to become a tightly-managed engineering project incorporating the most advanced technology from RDA’s research and development laboratories.

Dr. Lovecraft has been nominated for multiple Nobel Prizes in biological sciences, but the nominations have invariably been withdrawn following protests from human rights organizations, the UN Pan-Faith Council, and animal rights activists. [1]

The Avatar Program combines genetic information from the native race of Pandoran humanoids, the Na'vi, with human DNA from a selected human operator or controller, also known as a "driver".

Avatar drivers are selected on Earth from volunteer pools using incredibly stringent selection criteria, requiring high motor coordination skills, mental acuity and resistance to mental fatigue. The operators are physically screened and genome sequenced, and a number of tissue, blood and cell samples are taken. Overall, 99% of the trainee intake fail the initial testing. The successful creation of an avatar/operator pair is an extremely expensive process - costing upwards of five billion dollars for each successful avatar build.

Once a suitable operator is found, avatar creation begins in earnest. RDA genetics labs create a hybrid embryo, which is a fused genetic product of the Na'vi and human operator DNA donors. Creating a viable embryo is the most complex part of the process and is prone to failure since the alien Na'vi genome is significantly different to human DNA. The composite eliminates defects, reduces the influence of individual Na'vi appearance traits and boosts compatibility with the human donor DNA sample.

From the hundreds of embryos grown specifically for each operator, many die before reaching the fifty-cell stage. However, some high-quality embryos survive into early organogenesis.

An avatar driver uses a whole-body remote neural interface to control and animate the avatar body. These link units are located in a dedicated facility, such as that installed at the Hell's Gate base on Pandora. The link beds outwardly resemble MRI scanners, with the operator reclining inside an enclosed capsule. The capsule incorporates neural collection and feedback loops for control transmission and reception of sensory information from the avatar body. The link capsule also continuously monitors operator vital signs and avatar operational parameters. In the event of an abnormality, the link is discontinued immediately or referred to a BioLab technician for further analysis.

To initiate the link, the operator clears his or her mind and enters a transit state of consciousness while the link is established. Once operator-avatar connection quality stabilizes above 99%, the link is set to active; the operator then immediately 'wakes up' inside the avatar body. The operator's own neurotransmitters then cause atonia, disconnecting the operator's natural body from the movements played out by the avatar. Continuous link times vary by individual operator; a new operator may tire and prematurely disconnect from the avatar after only a few minutes, while an experienced driver is capable of several hours or even days link time. Upon disconnection, either by emergency fail-safe or the operator's conscious command, the avatar reverts to a static sleep state, while the operator's consciousness is awakened safely in his or her own body. Disorientation is common upon return, although experience reduces downtime. Emergency disconnections are dangerous, potentially resulting in shock to the human operator and damage to the avatar itself. Catastrophic damage to the avatar, resulting in its biological death, has the same effect.

Avatar operations are limited by the need for the human operator to sleep, rest, and eat. Similarly, the avatar body must be maintained through periods of activity alternating with sleep/disconnection time as well as by consumption of fluids and foodstuffs.

The link machinery is small enough to allow for field operation where link transmission range may become an issue. Compact field bases feature a bank of three ruggedized link beds. Basic science/accommodation facilities are included with embedded power and air filtration, making them fully self-sufficient for short sorties into the Pandoran jungle. The field base can be air-lifted using a Samson air transport to reach remote locations. Although occasionally prone to 'glitches', transmission strength is strong enough to ensure link integrity even in extreme environments such as the flux vortices found in the Hallelujah Mountains of Pandora.

Notable Members Seen in the Film[] 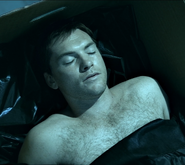 The Avatar Program is headed by Dr. René Harper, as part of RDA research. While Dr. Grace Augustine uses her avatar form to teach rudimentary English to some of the Na'vi, Colonel Quaritch prefers to use them to gain the Na'vi's trust and to find out means to make them move from Hometree, as seen from his deal with Jake Sully.

After the Assault on the Tree of Souls, it appears that many avatar drivers eventually sided with the Na'vi and defected from the RDA. When the Na'vi expelled the humans from Pandora, several armed avatars are seen next to the Na'vi warriors as the other humans are driven out of the base. They were among those allowed to stay for helping the Na'vi defeat the RDA.

Jake observes his avatar in its tank

The team preparing for a mission