Edit
watch 01:36
We're Getting Mutants in the MCU - The Loop
Do you like this video?
Play Sound

The Clan Leader (Na'vi name: Olo'eyktan) is the most important member of a Na'vi clan and is similar to a chieftain. The leader is in charge of the clan and may rule along with their mate. While the Tsahìk leads the clan spiritually, the Olo'eyktan leads them in flesh, such as organizing hunting parties, war efforts, and managing relations between humans and other clans.

Olo'eyktan is a gender-neutral word by default and can be used to refer to a leader of any gender. However, there is a specifically female variant of the word, olo'eykte, which can be used when specifying the gender of the leader is required, in which case, olo'eyktan may be used specifically for male leaders.[1][2]

A clan leader will choose a successor in their lifetime, often a Na'vi who has demonstrated immense skill in combat and hunting. Aside from technical skill, a clan leader must also be able to unite, guide, and understand their people, something Tsu'tey notably struggled with at first.[3]

The role of clan leader is not gender restricted. Clan leaders are often mates with their clan's tsahìk, though there is deviation from this, such as in the case of Ikeyni and Tsentey, and the Tipani Clan, which has a single leader filling both the role of Olo'eyktan and Tsahìk. The Tipani also has several clan leaders each in charge of their own individual village, though they are still overseen by the primary Olo'eyktan. 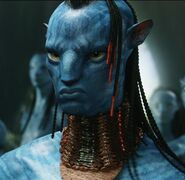 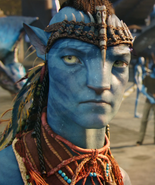 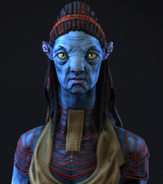