The Combat Shotgun is a semi-automatic, RDA-designed weapon, based on the CARB platform. It uses 20mm shells to disperse a spray of small spherical pellets when fired. These pellets can cause horrific injuries at close range, and are highly effective against the Na'vi as they often charge at RDA troops to use close combat weapons such as axes and spears. Used as a backstop defensive measure and for capacity layering during security missions, the shotgun can utilize a raft of various 20mm munitions such as air-burst grenades, high-explosive rounds, armor-penetrating rounds, flechette rounds (metal darts), cluster munitions delivery, etc. It features in Avatar: The Game and can be upgraded several times.

Primarily used as a force multiplier during security missions, this gas operated (optional pump-action with extended barrel section), 20-round disposable plastic box magazine fed shotgun weighs 6 kilograms when loaded. The shotgun can feature a programmable air burst, munition launch base, extended barrel, carry handle, scope, torch/fore grip unit, and a recoil absorbing stock. At a total of 810 millimeters the weapons scope can be changed to fit any scenario with scopes such as an omnisight optic, reflex sight, red-dot sight, or a built-in laser HUD (Heads-Up-Display) used.

One of the prop makers for the film described the weapon as a "pump action shotgun" in a behind the scenes video about the film. The bullpup shotgun action can also be fitted to accessory rails mounted under the barrel of the Assault Rifles, similar to the configuration of the Pulse Rifle from James Cameron's 1986 film, Aliens.

The shotgun, as you would expect, is highly effective against Na'vi and viperwolves at close range and is commonly used in multiplayer to counter powerful Na'vi melee attacks. When used in conjunction with the beserk skill, it often kills Na'vi with just a single shot. In total you carry 96 rounds of ammunition and the models available in single player are as follows:

In multiplayer you only carry 24 rounds of ammo and the weapon has the following statistics: damage 12.5/20, rate of fire 2/20, range 6.5/20, magazine size: 8 rounds. The models in multiplayer are all the same in terms of performance but vary in colour. 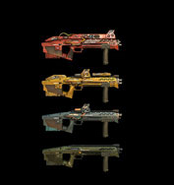