Earth (Na'vi name: 'Rrta)[1] is the third planet from the Sun, the largest of the four terrestrial planets, and the fifth largest and densest of the eight planets in the Solar System.

Earth is the third planet of the Solar System, and the home planet of humanity. It is a relatively small planet compared to other and much larger planets in the Solar System such as Saturn and Jupiter, though it is quite large compared to most terrestrial planets in the Solar System, such as Mercury and Venus. By 2129, Earth had undergone significant deforestation coupled with near total extinction of wildlife on the ground and in the oceans. Due to the destruction of the natural environment and vast urban expansion, the Resources Development Administration (RDA), began to grow vast sea farms of edible protein and nutrient-rich algae, which was flavored with spices and other ingredients, in order to feed the twenty billion people of Earth both cheaply and effectively. Algae became the staple food for many humans on Earth and the Moon. The RDA also constructed a vast mass transit system that connects the entire globe, a maglev which requires unobtanium to function[2]. Much of the eastern coast of America was damaged in a Tsunami event in the 2140s.[3]

Earth was rocked by a significant intercontinental conflict in the 22nd century - the conflict in which Jake Sully was paralyzed - and from which the global energy crisis arose, with a great demand for natural resources. With much of Earth's natural resources depleted forever, all eyes on the planet turned to extraterrestrial worlds. Earth's space programs had, by this time, evolved to the point of being able to send a manned mission to the Alpha Centauri System, a nearby trinary star system, in which humanity found a diamond in the rough, the habitable moon of Pandora. In the hopes that the vast deposits of unobtanium located on Pandora could save Earth from its energy crisis, humans began vast mining operations that cut deep scars into the moon's surface.

In the 22nd century, the population of the planet had more than tripled since the previous century. Due to pollution, famine, poverty, and war, the population had topped out at around 20 billion people.[4] The Earth is now a decaying world, covered in a haze of greenhouse gasses. Overpopulation, nuclear warfare, pollution, environmental terrorists, significant deforestation, world hunger, ozone depletion, resources depletion, water shortages, and overhunting of what is left of Earth's very few still living animal species are the main things that are slowly consuming what is left of the once beautiful planet.[4]

People wear face masks to breathe in the polluted air

Jake lying in the alley after the bar fight 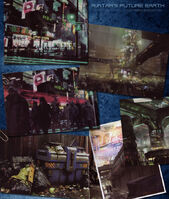 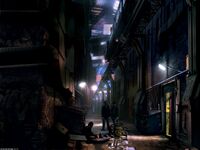