Edit
watch 01:36
We're Getting Mutants in the MCU - The Loop
Do you like this video?
Play Sound

Major John Cage was a character in the Avatar iOS/Android game. He was the chief of security of the RDA base of operations on Pandora 20 years before Colonel Miles Quaritch. Little is known about Major Cage besides his occupation and equally low regard for Pandoran life, similar to Colonel Quaritch. In the final chapter of the story of Ryan Lorenz, as told by Neytiri, Major Cage tried to kill Lorenz out of disgust over his betrayal. He was unsuccessful and was killed by Lorenz.

John Cage is also the final boss of the mobile game, although it conflicts with the story of the iPod game. John Cage was defeated by Jake Sully who, similarly to Ryan Lorenz, chose to side with the Na'vi in the conflict. 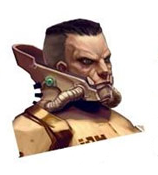