Edit
watch 01:25
Jurassic World: Dominion Dominates Fandom Wikis - The Loop
Do you like this video?
Play Sound
This article is a stub. Stub articles lack details, sources or are of low quality. Make the article better by expanding it.

The Metkayina are a lesser-known Na'vi clan, located on Pandora's reefs. The clan is led by Tonowari and Ronal.[1]

This clan makes use of their extensive and diverse habitat in many ways and has a close relationship with water; just as clans such as the Omatikaya and Olangi ride direhorses to trek the landmasses of Pandora, the Metkayina use ilus as their companion of choice for gliding across the Pandoran oceans.

The Metkayina live along the shores of the Pandoran oceans, on islands or near the mainland,[2] primarily in villages called marui which are built into the roots of mangrove-like trees spanning the islands.[3] These homes hang directly above the water presumably for easy access for swimming. Massive seawall terraces, similar in appearance to travertine terraces, guard the villages from strong waves and provide an easy place for the clan to fish. The Cove of the Ancestors is an area sacred to the Metkayina.

The clan practices the art of tattooing and is the only clan currently known to do so. Many of its members have large tattoos spanning entire appendages. They have also domesticated ilus, using them as a mode of transport across the Pandoran oceans, much like direhorses of terrestrial Na'vi.[4] During combat, the Metkayina ride the skimwing.

The Metkayina have adapted seemingly for an aquatic lifestyle, bearing considerable differences from mainland Na'vi. The eyes are enlarged considerably and feature a blue color rather than yellow, the forearms have expanded to include a fin-like structure, and the tails are broadened to form a paddle shape and lack a tuft of hair at the end. Stronger upper bodies can be observed, especially in males, who also possess a slightly different chest structure from mainland males.

Curly hair appears to be the norm within the clan. Their skin also sways to a more green or turquoise color than the traditional blue, with fluid, ripple-like stripes. 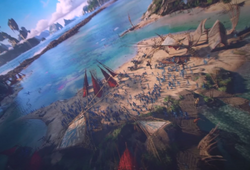 Village on an island

The Metkayina prepare for battle

The Metkayina hold a ceremony

The Cove of the Ancestors