The Omaticaya clan (Na'vi name: Omatikaya meaning "Blue Flute clan") is a Na'vi tribe of the forest. They formerly lived in a Hometree in one of Pandora's huge jungles. The Omaticaya people are led by Jake Sully (formerly Eytukan and temporarily Tsu'tey) and Mo'at, and share a deep connection with the forest. Three Toruk Maktos have been members of the clan, most notably Jake Sully, the sixth Toruk Makto, and Entu, the first.

While other clans such as the Anurai organize themselves around carving or pottery, the Omaticaya are renowned for their brilliant textiles and weaving skills. Thus, the loom plays a key role in the daily life of the clan. The largest of the Omaticayan looms is more massive than a Terran pipe organ. This 'mother loom' is given a place of honor in the common area of Hometree.[1] The Omaticaya believe that if a job is done correctly it should never be done again; thus they will take as long as needed to perfectly construct a single bow, ax, or spear. Music is of great importance to the clan, more so than any other, hence the clan being named after their most incredible and elusive instrument, the Blue Flute.

The clan is led by an Olo'eyktan and Tsahìk, who are typically a mated pair.

The Omaticaya are a jungle-dwelling clan that previously made their home in one of Pandora's massive Hometrees. Their Hometree was over 20,000 years old and 300 meters (~900 feet) tall. The clan made use of all of its levels, with the deepest, underground chamber being reserved for ceremonies, the surface level for general living and gatherings as well as housing the mother loom and Toruk Makto totem, the upper chambers for cultivating hammocks to sleep on, and the canopy for sheltering the hunters' ikrans.

After the Omaticaya's ancestral hometree was destroyed, Jake Sully temporarily relocated the clan to a living area near Hell's Gate while the clan waited to claim a new hometree for themselves.[2]

When prospective hunters reach a certain age, they must perform Iknimaya, a rite of passage in which a young Na'vi must climb up into the Hallelujah Mountains to find an ikran. Through tsaheylu, the initiate creates a lifelong bond with it. Once this act is performed, they must then complete Uniltaron. After this, the initiate is accepted by the tribe as one of the People and is allowed to carve a bow from a branch of the Hometree. The new clan member may also choose a mate.

When a member of the clan dies, the Omaticaya dig a hole near the roots of Hometree and place the deceased inside. The friends and family of the deceased line the grave with flowers and a Woodsprite is placed over them, along with their songcord. The clan honors the fallen member with singing and chanting.[3]

Some of the earliest Omaticaya tales speak of Entu, the first-ever Toruk Makto who, with his friends Ralu and Tsyal, tamed the beast in order to save the Tree of Souls from destruction. Several millennia later, Neytiri's great-great-grandfather became the fifth Toruk Makto. The clan greatly honors Toruk Makto because of this, constructing a totem in remembrance of the legendary hero. The story of Toruk Makto is frequently recounted to children as they grow and learn.

The Omaticaya were the first clan to make contact with humans and established peaceful negotiations with them.[4] Grace Augustine and René Harper founded a schoolhouse in 2142[5], to teach the clan English and strengthen diplomatic ties. However, ten years later the security forces disastrously killed a number of the students, including Sylwanin, the daughter of Mo'at and Eytukan and the tsahìk-in-training.

While diplomatic relations improved after the clan accepted Jake Sully in 2154, their ancestral Hometree unfortunately resided over the largest deposit of unobtanium anywhere near the humans' settlement at Hell's Gate. This inevitably led to conflict, as the RDA came to Pandora largely in the pursuit of the substance. After negotiations failed between the humans and the Na'vi, the Hometree was destroyed, and the Omaticaya were forced to take shelter at the Tree of Souls.

Members of the clan[]

Seen in the film[] 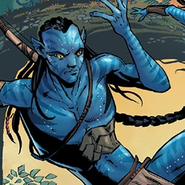 Avatar: The Next Shadow[] 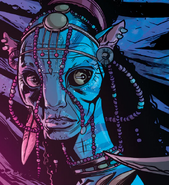 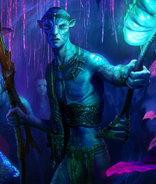