The World of Avatar: A Visual Exploration

The World of Avatar: A Visual Exploration is a book that visually explores locations, creatures, technology, and other "key content" from the Avatar franchise. While similar in focus to James Cameron's Avatar: An Activist Survival Guide, the book is the first that includes material released after the first Avatar film, specifically Toruk - The First Flight and Pandora: The World of Avatar.

Celebrate the first decade of James Cameron’s Avatar and the beginnings of an epic cinematic journey.

Delve into the majestic world of Pandora and discover the incredible wealth of creativity that led this story to become the highest-grossing film of all time and the winner of three Academy Awards.

The World of Avatar celebrates, explores, and explains the spectacular world of Pandora—its extraordinary geology, flora and fauna, and the customs and beliefs of its people, the mysterious Na'vi. The book uniquely covers key content from all aspects of the burgeoning franchise. It combines original movie stills and artwork with stunning imagery from Cirque du Soleil's Avatar-inspired show [Toruk: The First Flight; and Disney World’s Pandora—The World of Avatar.

With a foreword by Avatar star Zoe Saldana (Neytiri), and an introduction by producer Jon Landau, The World of Avatar concludes with a “sneak peek” of a new Avatar era, fueling excitement for the long-awaited release of Avatar: The Way of Water in December 2022. 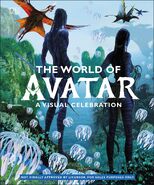 Early version of the cover art with temporary title for sales purposes, not officially approved by licensor 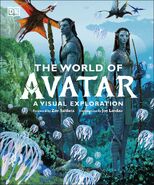 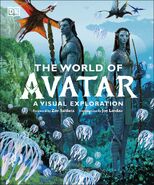 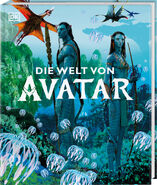 Final cover of the German version 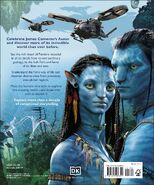 Back cover of the US version

Early preview centering around the Na'vi species and culture.

Final preview centering around the Na'vi species and culture.

Originally intended for release on October 1, 2019 with the title The World of Avatar: A Visual Celebration, the release was delayed to October 6, 2020. The product description was later updated to reflect the delay of Avatar 2 to December 2022, with the new book release date expected to be on April 22, 2022. It was later updated in August 2021 to an expected March 1, 2022 release date[4][5][6] In December 2021, the release date was adjusted to April 12, 2022. The title was changed to The World of Avatar: A Visual Exploration and the description was modified slightly, removing mention of the inclusion of Avatar: Tsu'tey's Path and including the involvement of Zoe Saldana and Jon Landau.[7]

The first physical version was released in the UK on March 10, 2022, together with an international eBook version.[1]

The US version was delayed several times with a final release date of May 31, 2022. It features a slightly different cover compared to previous releases. A woodsprite hovering over Jake's foot is missing.[3]